Last year, I had occasion to interview a lovely lady, a talented art quilter who lives nearby. The interview was for American Quilter Magazine – my article entitled, Is Quilting Healing Medicine? Margaret Jones Jessop had lost her beautiful 31 year old daughter, Katy, in 2014.

At the time, I couldn’t relate to Margaret and her family’s searing, lingering pain. Now, unfortunately, I can. It’s one club that I wish I didn’t belong to – parents who have lost a child.

Margaret mentioned to me that she didn’t touch her sewing machine for six months after Katy’s death. She had no interest whatsoever in sewing or quilting or creating. I get it, completely – I haven’t  touched my sewing machine since Mike’s passing. It’s like all creative juices instantly dry-up. There is a deep feeling of “what’s the point”?

Three weeks ago, my husband casually mentioned to me, “Maybe we should get that dog now”. I know that it was his attempt to make me feel better and I love him for that. I had been searching online for a older, rescue dog…a hypo-allergenic senior that wouldn’t irritate my allergies and was already house trained. I had been monitoring several Alberta senior dog rescue websites like,  ARTS, Senior Animal Rescue, Misty Creek Dog Rescue, and of course, the City of Calgary. but finding a small, senior dog in a certain breed (shih tzu, bichon, maltese) is like trying to find a needle in a haystack.

Then I happened upon Heaven Can Wait, a rescue organization run by Kim Hessel from a rural setting outside of High River, Alberta. I was inquiring about Beau the Bichon but Kim regretfully let me know that Beau had already been adopted. But, as luck would have it, she had a ten-year old, ten pound Maltese rescue that would be available for adoption. “Snowy” as her previous owner named her, was used to peace and quiet and needed to be placed in a home without children living there and be the only dog in the home. That was us! Placing a senior dog with seniors? Hmm…it sounded like a good idea to me.

So, Rick and I took a road trip and headed out to High River to meet the dog. 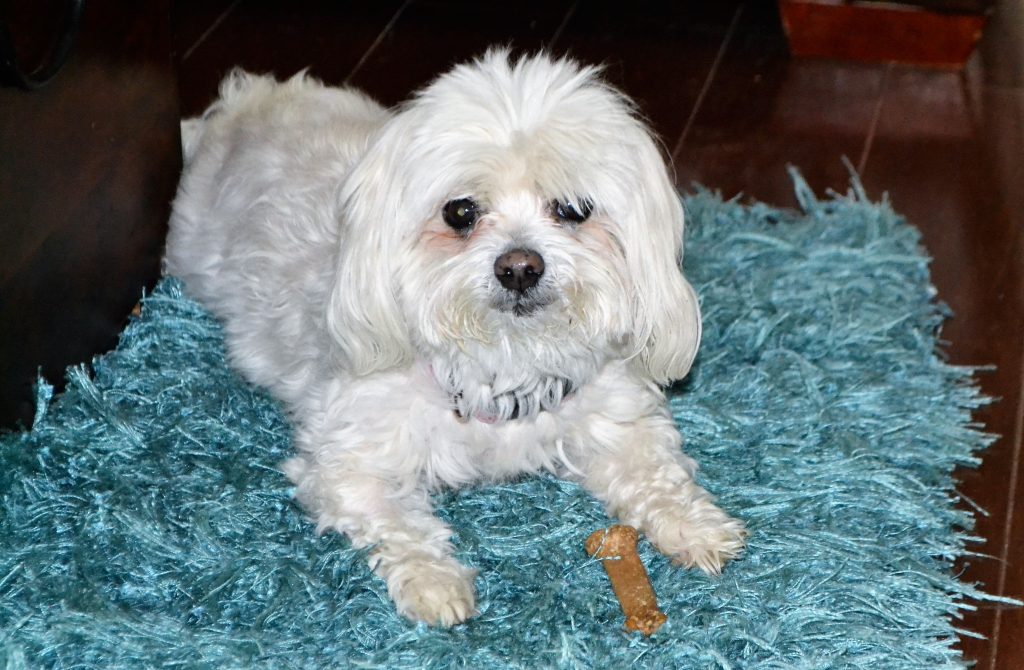 She was adorable! It was love at first sight for me. It took Rick a smidge longer.

After some extensive doggie dental work, Kim gave us the green light and we took Snowy into our home for a ten-day trial period, which passed in the blink of an eye. Snowy is absolutely lovely and now she’s our little dog. We take her on daily walks, car rides and she sleeps on our bed at night. She’s eased the pain, just a little bit, of losing our beloved Mike. It’s like she fills a portion of that gaping void in your heart. She’s like a tonic that soothes. She’s an affectionate little girl that brightens our day. She’s wonderful company.

The other day, just out of the blue, I decided to work on some quilt designs in response to a “call for queries” from Annie’s Publishing. Like I used to do, before Mike passed, I started to pull out fabrics from my cupboard. I sat down at my desk and drew and erased and drew some more. It was so cathartic! I couldn’t believe how being creative was part of who I am. I came up with three queries for the editors and we’ll see if they like them or not.

I know this new development is not just because of a dog. Rick and I both have a very long way to go. But I also know that Snowy has helped us tremendously. I hope we can make a good home for her and give her some happy years. Just like she will give us.